Guizhou Province of China, also known as Qian, has a unique and mystic quality that attracts tourists from different parts of the world. It is a land-locked mountainous region with beautiful natural landscapes, forests, waterfalls, karst caves, etc. A majority of the region made up of villages occupied by minority groups like the Miao and the Dongs. There is negligible urbanization, yet it has many beautiful resorts to cater to the vast number of tourists that visit the Province.

The Guizhou Province is located in the southwest of China and more than 95% of the terrain is mountainous. It is surrounded by the Chongqing Municipality and Sichuan Province in the north, the Guangxi Province in the south, and the Hunan Province in the east. The Yunnan-Guizhou Plateau dominates the landscape in the west. So there are taller and more closely-packed peaks along with deeper gorges towards the western side. In comparison, the eastern and southern hills are relatively flatter and more akin to a large plateau.

What is so unique about these mountain ranges is the spectacular karst caves along the mighty cliffs. Karst formations have layers of limestone, dolomite, and gypsum which pack together over centuries to form the brightest and most colorful rocks and mountains. The cliffs in Guizhou also contain quartzite, hence they are resistant to corrosion and have remained intact for millions of years.

Winter and spring seasons are the best times to explore Guizhou Province that is between the months of November and May. The summer season is hot and humid with temperatures ranging between 22 and 25oC. But since the Province is a hilly region, there is a large number of domestic tourists taking advantage of the hill stations to escape the heat in the urban areas. With temperatures ranging between 3 and 6oC, some people may prefer to visit in winter. The autumn season is not a good time to explore Guizhou because it experiences hailstorms quite often.

Despite its predominantly ethnic and rural lifestyle, the province of Guizhou has a few well-established industries like forestry and timber processing, tobacco, and power generation. The region is a rich source of coal, arsenic, shale, limestone, gypsum, and other minerals that have an extensive industrial use. Hence, mining and allied industries have developed in the last few decades leading to urbanization of a few towns.

Another reason for economic and infrastructural development is a large amount of tourist trade and the need for hospitality services. Besides Guiyang, the provincial capital, other major cities are Zunyi, Anshun, Tongren, Panzhou, Fuquan, Zingyi, Kaili, etc.

The 39 million population of Guizhou Province is made up of 49 different ethnic groups like Han, Miao, Tujia, Gelao, Hui, Bouyei, Yi, Dong, Shui, etc. Of these, nearly 17 groups belong to the minority ethnicities, accounting to more than 36% of the total population of the province. Their unsophisticated customs and traditions are part of the charm that attracts tourists.

The mountains are ideal for adventure sports, nature trails, trekking, hiking, bungee jumping, cable car rides, and others. The region is filled with scenic areas, resorts, village fairs, festivals, and other activities that are unique to Guizhou.

Since the 11th-century BC, many dynasties have ruled over what is known as Guizhou Province today. They include the Qin, Shu, Dian, Chu, Han, Tang, Song, and Ming Dynasties. Every change in rule left a mark on the culture, customs, traditions, and religious practices of the local people due to the influence of migratory population from other provinces.
Consequently, Guizhou Province has become a kaleidoscope of colorful and enjoyable festivals. The Lusheng Festival is the grandest festival of all. Lusheng is a flute-like musical instrument. Young girls dress in the traditional costumes and silver headgear and the boys, in equally colorful outfits play the melodious lusheng. This event is so popular that it is usually hosted in a large stadium.

The Miao minority ethnic group is especially talented in the art of embroidery and paper cutting. Their traditional outfits have artistic patterns embroidered in bright colored threads. In fact, the two art forms are closely connected. The paper cuttings were originally created to set the patterns for the embroidery and later became an art form of its own.

Besides the Guiyang Longdongbao International Airport, there are six airports in the Guizhou Province that more than adequately cover the air transport needs of the region. The Guiyang Railway Station is a major junction for many major lines running between other provinces of China, from north to south and from east to west.

The region has a good network of internal railways lines to reach even the remote tourist attractions. Some of the sites along these railway routes have spectacular scenery and a rail journey can be a very pleasant experience. The picturesque Beipan River Bridge on the Liupanshui–Baiguo Railway in western Guizhou is the highest railway bridge in the world.
The karst caves in Guizhou are a UNESCO World Heritage Site and a popular tourist attraction. The most spectacular formations are in the Zhijin Cave. Other popular attractions include the Huangguoshu Waterfall which has a drop of 74 meters, the Qingyan Ancient Town and Fortress, and the Luojie River Scenic Area.

Known as Qian cuisine, the food in Guizhou Province have an ethnic flavor. As it was very popular during the Ming Dynasty’s reign, some of the existing specialties are very elaborate and have a history of almost 600 years. The recipes consist of the liberal use of vinegar. Other ingredients used are sticky rice, wild tomatoes, hot peppers, shallots, soy sauce, garlic, ginger, spicy sesame oil, etc. Some of the popular dishes include fish in sour soup, crackling fish with Zao pepper, Huaxi beef rice noodles, Gongbao chicken, and others. With the world-famous and impressive Huangguoshu Waterfall in its vicinity, Anshun City sees a lot of tourists from d... 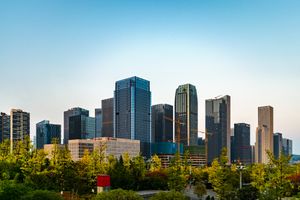 Located at an altitude of 1,100 meters above sea level on the Yunnan–Guizhou Plateau is the scenic city of Guiyang. I...