Tai’an City has been a popular tourist spot since ancient times for various reasons. Its proximity to the picturesque Tai Shan (Mount Tai) makes it a great spot for ecotourism. The naturally growing peach blossom forest is a splendid sight that attracts thousands of tourists each year. Also, Tai Shan is considered one of the holy mountains of China and believers visit the site as a pilgrimage. It is said that Tai Shan is the place where the three worlds meet – the World of Gods (Heaven), the World of Mortals (Earth), and the World of Afterlife (Hell). Besides magnificent vistas, the mountainous region around the city of Tai’an has several ancient historical and cultural relics that fascinate the locals, domestic travelers, and overseas tourists.

Stop at Foreman Hotel to discover the wonders of Taian. Featuring a satisfying list of amenities, guests will find th... 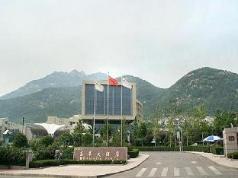 Located in Taishan, Ramada Plaza Taian Hotel is a perfect starting point from which to explore Taian. The hotel offer... 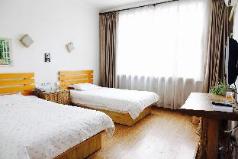 Taishan International Youth Hostel is perfectly located for both business and leisure guests in Taian. Featuring a co... 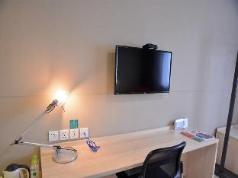 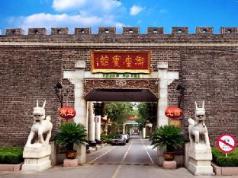 Taian Yuzuo Hotel is a popular choice amongst travelers in Taian, whether exploring or just passing through. The hote...

The tourist attractions near Tai’an City are centered on Tai Shan. There are magnificent peaks, deep valleys, dense virgin forests of ancient pines and cypresses, breathtaking waterfalls, unusual rock formations. The numerous attractions in the Tai Shan Scenic Area can be seen by following different climbing routes. They include:

East Route – This climb consists of 6,000 steps and is called the Imperial Route. It is dotted with unmatched natural beauty and manmade structure. The route starts from the Dai Temple and passes along the Eighteen Bends, Dai Zong Archway, Jing Shi Valley, Red Gate Palace, and Hu Tian Pavilion.
West Route – This climb consists of two sections. The first section is a high-level walkway which starts from the Heaven & Earth Square and reaches the Mid-Heaven Gate. Here, a cable car service is available to reach the Jade Emperor Summit. The attractions along this route are the Heaven & Earth Square, Tomb of General Feng Yuxiang, Black Dragon Pool, Longevity Bridge, etc.

Peach Blossom Valley Route – This is the easiest route to reach the summit of Tai Shan. One can get taxi cabs or buses along the national highway that passes through the Peach Blossom Ravine. The cabs or buses transport tourists up to the cable car station. Then one can take the cable car to reach the top. This route is a favorite of naturalists and photographers because the cable cars pass over miles and miles of pristine peach blossoms forests that lend a splash of color. The peach blossoms are in full bloom in the month of April. The route is designed so that visitors can see all the sights from the air without needing to climb uphill.

Tianzhu Peak Route – This route is popular with hikers, trekkers, and climbers because it is a rugged and tough route. The Tianzhu Peak is steep and almost vertical like a gigantic candle and has a tall ancient pine tree at the top. The tourist attractions along this route are the Big Tianzhu Peak and Small Tianzhu Peak, General Peak, Eight Immortals Cave, Hou Shi Wu pine forest, etc.