The city of Xuzhou epitomizes the Han Chinese culture. Xuzhou is located in the Jiangsu Province of China and lies at the intersection of Henan, Jiangsu, and Shandong provinces. The city has a rich history and has always been well-known for its prosperity. Due to its geographical location where it forms a strategic link between north and south China, it has been a city coveted by all the three provinces. Visitors come to the city for its wealth of historical relics and ancient culture that is noticeable even though it is a modern, well-developed urban area today. 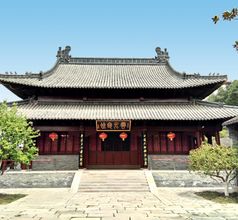 Going by some of the ancient relics discovered near Xuzhou City, its civilization can be traced back to the prehistoric times when the Dawenkou culture system existed. The region also has some wonderful monuments that showcase the city’s Imperialistic history. Xuzhou was a frontline city even during the Communist revolution and has many tourist attraction of that period.

Today’s Xuzhou City is a semi-urban area with some parts having sky-rises, 5-star hotels, and recreational center, while the other parts have ancient monuments and historical sites. The Han Chinese culture is dominant and the local people are educated, cultured, polite, and helpful.

Xuzhou City has its fair share of top-grade hotels most of which are located in the Gu Lou locality. One has a choice of 2, 3, 4, and 5-star hotels, cheap hotels, and low-priced inns. The star-rated hotels have aesthetically decorated spacious rooms, in-house multi-cuisine restaurants where even western dishes are served, and 24x7 services like laundry and housekeeping. The staff in these hotels usually have some knowledge of the English language. In the low-priced lodgings, the rooms are usually clean but the amenities are just basic and the staff may or may not understand English. In which case, downloading a translation app will prove useful. 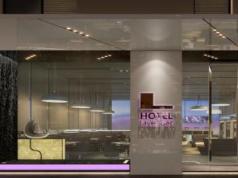 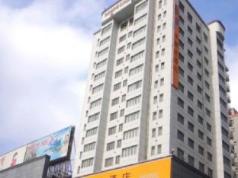 Xuzhou Elan Hotel is perfectly located for both business and leisure guests in Xuzhou. The property features a wide r... 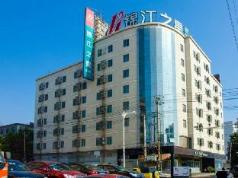 Set in a prime location of Xuzhou, Jinjiang Inn Xuzhou Train Station puts everything the city has to offer just outsi... 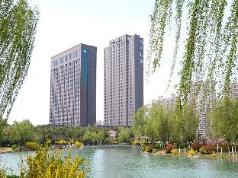 Located in Gulou, Wyndham Xuzhou East Hotel is a perfect starting point from which to explore Xuzhou. Offering a vari... 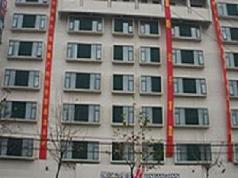 As Xuzhou City is the birthplace of the Han Dynasty’s first emperor Gaozu, the city has many historical and cultural treasures. The most significant one is the Handai San Jue area which is the biggest Han Dynasty cultural relic. This tourist attraction consists of beautiful mountains, lakes, and massive Han tombs. The tombs have aesthetically designed pavilions, courtyards, gardens, sculptures, etc. that are definitely worth seeing.

The largest and most outstanding one is the Guishan Han Tomb for King Chu Liu Zhu (sixth Han Dynasty king) and his wife. This attraction consists of fifteen rooms which include bedrooms, parlors, kitchens, and even stables.

Another superlative tourist attraction near Xuzhou City is the Han Dynasty Museum of Terracotta Warriors and Horses. This impressive archaeological site was discovered as late as 1984 and is the only terracotta army of the Han Dynasty period.

Several villages around Xuzhou City has developed into popular tourist attractions. The Pinyin Village is well-known for the Wushu form of martial art and the local demonstrate their moves for the benefit of tourists. The Qijia Village is also known as the “Chinese chess village” because the people are brilliant in the game. The Mazhuang Village is also called the “Chinese Folk Custom and Culture Village”. One can make day trips to these villages from Xuzhou and experience the wonderful local culture.

Xuzhou Guanyin International Airport in Jiangsu provides air support to Xuzhou. The airport’s second terminal was completed in June 2018 and serves domestically, whereas terminal 1 is for international flights, mainly to Asia. At a distance of 45 kms from city center of Xuzhou, taxi takes 45 minutes to get to the airport. Most of the flights are to Dalian, Kunming, Shenzhen, Harbin, Chengdu, Chongqing, Guiyang and Jinjiang predominately by Air Guilin and Hainan Airlines.