There are two factors that have made Yiwu City in Zhejiang Province, China a popular tourist destination in recent years. One is the fact that it is surrounded by picturesque mountains on three sides. The other fact is that it is the biggest shopping hub in the country and has even been declared by the United Nations as the most successful business district in China. This has led to the rapid urbanization of the city which in turn has led to the development of top-quality hotels, transport systems, telecommunications, recreational centers, shopping malls, and other tourist facilities.

The Da’an Pagoda located in the middle of Xiuhu Lake is a beautiful sight. It was built in the 11th century during the Song Dynasty reign. It is a short boat ride across the lake and is considered a very romantic place with lush greenery and tranquility.

In contrast, the city houses several large modern commodity markets, of which the three largest ones are the International Commodity City, Binwang Market, and the Huangyuan Market. These three markets are within 5Kms of each other so it is easy to locate them. It is believed that together the three markets sell more the 40,000,000 types of goods.

The city of Yiwu has a regular flow of tourists throughout the year, especially from other parts of China. Being a shopper’s paradise, the city has grown more due to its vast commodity markets than for its tourist attractions. Consequently, there are many 3, 4, 5-star, service-apartments, budget hotels, guesthouses, inns, youth hostels in the city. So one can choose from upscale star-rated hotels to low-priced accommodation depending on one’s requirement. Yiwu City is a place of traders and merchants who have learned to communicate with overseas visitors. Also, the hospitality services are well-developed so the English language should not be a problem in the city.

Set in a prime location of Yiwu, BEST WESTERN PREMIER Ocean Hotel puts everything the city has to offer just outside ... 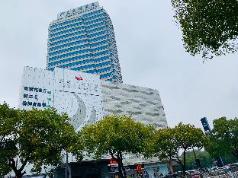 Yiwu Yimei Plaza Hotel is perfectly located for both business and leisure guests in Yiwu. The hotel offers a wide ran... 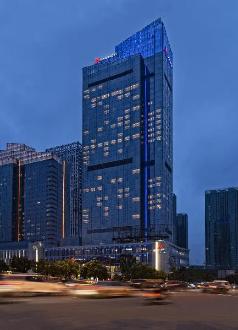 Set in a prime location of Yiwu, Yiwu Marriott Hotel puts everything the city has to offer just outside your doorstep... 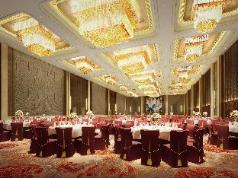 Shangri-la Hotel Yiwu is a popular choice amongst travelers in Yiwu, whether exploring or just passing through. Offer...

For visitors who prefer sightseeing over shopping, there are several tourist attractions in and around Yiwu City. The Tomb of Luo Binwang is an excellent historical monument and beautiful attraction. Luo Binwang was a child prodigy, who composed his first poetical masterpiece at the tender age of 7 years. He was famous during the Tang Dynasty and his poems are quoted even today.

The Xiuhu Lake Park is a sight that soothes the eyes! The lake park is a vast area of more than 70,000 square meters, of which the lake itself is the major part. The park also has many buildings constructed during the Ming and Qing Dynasties which have manmade hillocks, streams, bridges, arches, pavilions, pools, etc. that have inspired many famous authors, poets, painters, and filmmakers.