The southern Guangxi Zhuang Autonomous Region in China is well-known for its spectacular natural rock formations. It is a sought-after tourist destination because of its diverse and colorful landscape and interesting ethnic culture. With toothpick-like towering rocks, beautiful rivers, brightly colored stalagmites and stalactites, and the most attractive waterfalls, the region is a blessing of nature that has attracted tourists for ages from all over the world.

The southwest of Guangxi Zhuang Autonomous Region faces the Tonkin Gulf lying in the South China Sea. It forms an easy sea route and also an access point to Vietnam. The region is landlocked on the west by Yunnan Province, in the north by Guizhou Province, and in the northeast by the Hunan Province, and by Guangdong Province in the east and southeastern sides. Its access to the South China Sea has made the region a major trade route since ancient times and has given it an economic edge over the other provinces.

The mountains in the Guangxi Zhuang Autonomous Region have an unmatched natural beauty filled with many tourist sites. In fact, most of the landscape in the region is covered by splendid mountain ranges and caves. The Nanling Mountain Range towers in the northeast of the region. In the north are the Duyao and Fenghuang Mountain ranges.

The Yuecheng and Haiyang Ranges radiate from the Nanling Mountains and spread southwards. The Yunkai Mountains dominate in the southeastern areas. While the central region of Guangxi is blessed with the Da Yao and Da Ming Mountains. Towering at more than 2,140 meters above sea level, the Kitten Mountain in the Yuecheng Range is the tallest peak in the Autonomous Region.

The Xi River basin, a major tributary of the Pearl River, ably adds to the picture-perfect quality of Guangxi Zhuang Autonomous Region. This is located in the central part of the region and is at a lower elevation than its surrounding areas. The various tributaries of the Xi River and their offshoots spread all over the region. They form a network that lends beauty to the landscape and also acts as an efficient water transport system.

Another reason why the Guangxi Zhuang Autonomous Region is such a popular tourist spot is that it has a pleasant subtropical climate. The summers are hot at 23 to 29oC with heavy rainfall. But the winters are cool, dry, and pleasant at temperatures ranging between 6 and 16oC. The heavy monsoon rain is mostly in the months between April and September and not suitable for sightseeing.

Nanning, the capital of the Guangxi Zhuang Autonomous Region has the most fertile alluvial soil. No wonder Nanning is called the “Green Zone”! Since many centuries it has been one of the large producers of agricultural products. Although Nanning is a modern highly-developed urban area, even today the city is a major trading zone for food and cash crops like sweet potatoes, rice, sugarcane, maize, peanuts, and tobacco that grow in the nearby farmlands. It is also the largest exporter of kenaf, a fiber used to make a material similar to sackcloth. Almost 85% of the world’s star anise comes from Guangxi. The forests abound in medicinal herbs including a major ingredient of the Tamiflu anti-virus.

The mountain ranges are a rich source of non-ferrous metals. Nearly one-third of China’s tin and manganese comes from these areas. Besides Nanning, other major cities are Guilin, Guigang, Yulin, Qinzhou, Wuzhou, Dongxing, Pingxiang, Heshan, etc. Towns like Sanjiang, Longmen, Yangshuo, and others have evolved due to tourism.

Having a major trade route via the seaports of Qinzhou, Beihai, and Fangchenggang on the South China Sea has encouraged the establishment of many large-scale industries. The region leads in fields like Information Technology, bio-medicines, aluminum processing and products, heavy engineering products, electrical and electronic goods, agro-processing, alternative energy, processing of domestic and industrial chemicals, environmental protection equipment, etc.

The estimated current population of the Guangxi Zhuang Autonomous Region is more than 47 million, of which almost one-third belongs to the Zhuang ethnic minority group. The Zhuang people are very fond of and are accomplished in singing and dancing. Their Sanyuesan Singing Festival has been celebrated for ages and still is a very appealing tourist experience. The Bronze Drum Dance is another popular activity that characterizes the talent of the Zhuang ethnic group.

Despite the dominant presence of the Zhuangs, there are many other minority groups living in different parts of the region like the Yao, Miao, Dong, and Shui. Consequently, there are diverse languages, dialects, traditional clothing, architecture, etc.

They also celebrate different festivals, such as the Danu and Panwang Festivals of the Yao, the Huashan Festival of the Miao, and the Firecrackers Festival of the Dong ethnic groups. The sheer variety makes Guangxi one of the most charming tourist destinations in China.

Besides the Nanning Wuxu Airport and the Guilin Liangjiang International Airport, there are five feeder airports in Guangxi at Beihai, Liuzhou, Wuzhou, Baise, Hechi. These airports form a very convenient air connection between major tourist zones.

With three large active seaports in the region, Guangxi is also called the “21st-century Silk Route”. Due to large-scale sea trade, there has been a major development in expressways and rail transport systems in order to reach the port. Tourism is a huge sector that contributes to the prosperity of the region. This is because the three modes of public transport ensure that even the remotest tourist attractions can be reached easily.

The Guangxi Zhuang Autonomous Region has many famous tourist attractions. The immense karst rock formations on the mountains, with the beautiful Xi River passing through the valleys, are an irresistible sight. Cable cars are available so that visitors can absorb the beauty of the place in comfort. The West Street in Yangshuo is a popular spot for domestic and International tourist due to its western-style cafes and hotels.

The magnificent Longsheng Rice Terraces are a delightful sight and very popular with photographers, naturalists, artists, and tourists alike. Not far from Nanning on the border between Guangxi and Vietnam are the spectacular Ban Gioc–Detian Falls, another popular tourist attraction.

The signature dishes of Guangxi Zhuang have rice-based noodles as a staple. Most of the other ingredients like snails and fleshy river fish come from the Xi River basin. Some of their popular dishes are stuffed river snails, beer fish, Luosifen broth, looped meat, Guilin rice-flour noodles, Wuzhou fried paper-wrapped chicken, rolled rice pancakes, etc. 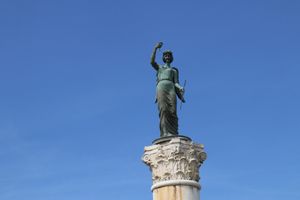 Beihai is a charming city in the Guangxi Province along the southwestern coast of China. Downtown Beihai is dominated... 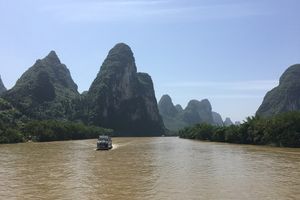 The city of Guilin is famous for its spectacular landscape of karst (colorful caves and rock formations) hills. Locat... 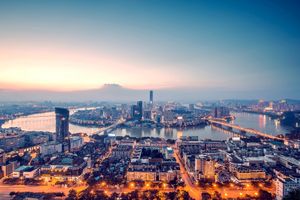 The city of Liuzhou is located in the middle of the Guangxi Zhuang Autonomous Region, China. The city itself is a wel... 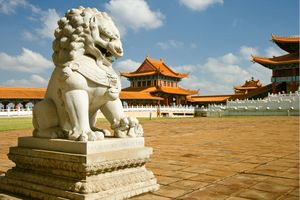 Located on the banks of the Yong River, Nanning is a city full of evergreen trees and a variety of fragrant flowers. ... 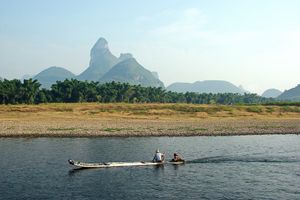 Well-known for its colorful karst rock formations and caves, the city of Yangshuo is a very popular holiday destinati...