Well-known as the birthplace of Mao Zedong, the Chairman of China’s Communist Party, Hunan Province has great historical significance. It is located in the south-central regions of China along the middle reaches of the Yangtze River. The Province is also known as the “land of hibiscus” because these flowers grow in vast quantities in the fertile lands. Its combination of mighty mountains and waterways makes it one of the most beautiful Provinces in China.

The Hunan Province is surrounded by mountains on its eastern, western, and southern borders. The Yuanjiang River, a large tributary of the Yangtze, dominates the northern districts creating a very fertile basin that is perfect for large-scale agriculture. The unique formation of mountains and plains gives the Province a horseshoe-like shape that is open in the northern direction. Mount Huping is the tallest peak in the region at more than 2,000 meters above sea level. The lowest point is the town of Huanggai which is at 21 meters above sea level.
The Province, on the whole, has a subtropical climate. Temperatures range from 4oC to 30oC, depending on the topography and the season. There are four distinct seasons of spring, summer, autumn, and winter. Summers are hot and humid with heavy rainfall. Winters are short and are cool or cold depending on the landscape. The best months for touring the Province are during the spring and autumn seasons when the region becomes colorful due to flowering plants or autumn leaves.

Hunan Province has a large population of more than 68 million. The bigger concentration of people is in the Dongting Plain and the river basin. The population in the urban areas is about 29 million and rural areas is about 39 million. The most advanced cities with a well-developed infrastructure are Changsha (provincial capital), Zhuzhou, Xiangtan, Yiyang, Changde, Chenzhou, Yongzhou, etc.

Due to its vast river basin and a large number of lakes, an innovative form of urbanization has evolved in recent years. New metropolises have sprung up with their own internal waterways. These new cities are designed with the intention of preserving the ecology, conserving energy, using alternate energy, preventing floods, and encouraging urban agriculture.

Blessed with rich alluvial soil the river basin of Hunan Province has been a major agricultural hub since ancient times. It is the leading producer of tea, rice, oranges, rhubarb, tobacco, and hemp. Apiary farming is also carried out on a large scale and the honey, beeswax, propolis (sticky sealant), bee pollen, flower pollen, etc. are of top quality and commercially viable products.

The development of industries has led to major urbanization in the last couple of decades. Some of the industries include heavy machinery, iron, steel, electronic goods, automobiles, biotechnology, agro products, food processing, packaging, mining and refining, construction equipment like cranes, concrete pumps, etc. Hunan has some of the largest automobile manufacturers in China. Decorative fireworks is another well-known product of the Hunan Province that adds to its economic development.

The population of Hunan Province is a good mix of cultures and ethnic groups that include the Tujia, Yao, Bai, Zhuang, Miao, Dong, and Hui minorities. The massive mountains that surround the Province on three sides and a river on the fourth side separate it from the other provinces. Hence, Hunan has a unique culture of its own with very little influence from the neighboring provincial populace.

The people are artistic and very accomplished. The Xiang embroidery of Hunan Province is believed to be the finest in China. The region is the origin of one of the most evolved ancient scripts called Nushu with nearly 700 phonetic symbols (logographs) or alphabets. The Huaguxi Opera (Flower Drum Opera) of Hunan is considered a spicy art form due to its earthy presentation and is very popular with the locals.

Many major railway routes radiate from the capital city of Changsha towards other important cities and towns in the Province. The Changsha Huanghua International Airport is one of the finest airports with more than 110 routes to 81 cities in China and overseas. It serves more than 43 domestic and International airlines like Xiamen Airline, China Southern Airlines, etc.

Changsha is also a junction for expressways that go in three different directions within the Province. Along with other arterial roads, the expressways provide easy access to even the far-off tourist attractions of the region. For example, the first suspension bridge made entirely of glass was built within the Shiniuzhai National Geological Park and is connected to the expressway road system to make the Park accessible.

One of the most popular historical relics in Shaoshan Village, Hunan Province is the Memorial Museum of Mao Zedong. The Wulingyuan Scenic Area is a UNESCO World Heritage Site with unique quartzite sandstone pillar-like rock formations, magnificent caves, enchanting waterfalls, plenty of flora, and countless varieties of wildlife including endangered species.

There are many ancient scenic areas, ruins, and monuments that showcase the empirical development of civilization in the province of Hunan. They include the Yueyang Pavilion, Manwangdui Han Tomb, Orange Islet, Zhangjiajie National Forest Park, Dongting Lake, Phoenix Ancient City, Mount Heng, etc.

Just like their opera, the cuisine of Hunan Province is also spicy. Their dishes are very aromatic and look colorful. Being a fertile land, the emphasis is on using the freshest ingredients for every dish. They use popular cooking techniques like braising, stewing, frying, smoking, and pot-roasting. Some well-known dishes include fried chicken with Sichuan spicy sauce, smoked pork with dried long green beans, Changsha-style rice vermicelli, Changsha-style stinky tofu, pearly meatballs, pumpkin cake, steamed fish head in chili sauce, etc. 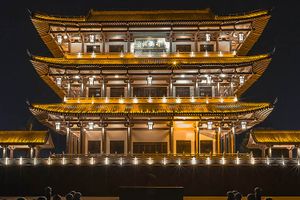 Changde City is located in the northern regions of Hunan Province, China. It is not too far from the spectacular West... 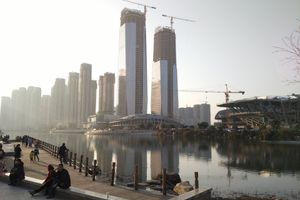 The city of Changsha was established on the plains of the Xiang River and was the hub of the Hu-Xiang Culture, an anc... 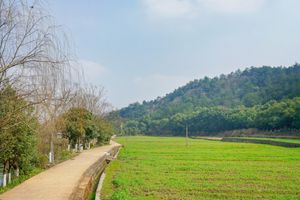 Located in the middle reaches of the Xiang River in the Hunan Province, China is the charming city of Xiangtan. Being... 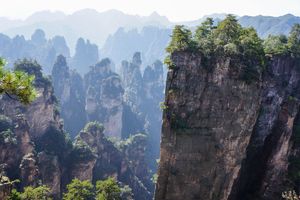 The Heavenly Pillar located in Zhangjiajie National Forest Park was the inspiration for creating the Hallelujah Mount...