It is also the biggest cultural center with many ancient tourist attractions. Along with its ancient relics, Shanghai City also has modern architectural extravagances like the Oriental Pearl TV Tower with its massive spherical shapes and the 632-meters-tall Shanghai Tower

The 25 million population of Shanghai is 99% Han Chinese. Being the largest container port in China, Shanghai has always been and still is a very prosperous region. A majority of the people are educated and have a tourist-friendly attitude.

The Pudong International Airport, Hongqiao Airport, and efficient rail, road, and waterway systems ensure that all the tourist attractions are within easy reach. The city has a plethora of tourist and business hotels to suit different budgets, a variety of multi-cuisine restaurants, food streets, shopping malls, ethnic marketplaces with souvenir shops, amusement parks, and other places that will interest tourists.

The food specialties of Shanghai include Xiaolongbao or soupy dumplings, smoked fish slices, fried pork buns, beggar's chicken, Shanghai steamed crab, braised pork, etc. There are streets selling nearly 1,800 varieties of snacks that are specific to the region and are very delicious. 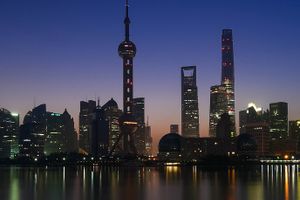 Shanghai is one of the largest and most vibrant cities in the world. It’s one of the four direct-controlled municipal...