Ripe with a history of 1,400 years, Xi Jie, or the West Street, is the oldest thoroughfare in Yangshuo along with being the most prosperous. The Li River and its surrounding region is known for its stunning natural karst landscape and the farming villages along its banks. The whole area seems untouched by urbanization. So imagine some travelers surprise when they stumble across the multilingual and very modern West Street, with its abundance of Western influence weaved into the everyday lives of the locals that not only inhabit the area but have embraced the diversity. Like an oasis in a desert, West Street stands proud in Yangshuo.

While multiple buses go directly to Xi Jie from downtown Yangshuo, there are also direct bus lines that ferry visitors from Yangshuo Bus Station and Train Station. There is no fee or timing for entering the street. A bicycle is considered the ideal mode of transportation and can be rented from West Street for a fair amount plus a deposit. Just make sure to check the condition before accepting the rental or you might have trouble en route and when returning it to the shop.

The West Street is a global village, where at times, there are more foreigners then there are local people. Several Westerners have opened up shops, bars and eateries here and call this place home. In turn, the locals have also become comfortable with their presence and many understand and even speak English. The 1,700 feet long street winds through town like a snake in an S formation and is lined with marble steps throughout its entirety in classic southern Chinese format. On one side there are shops, stores fronts and commercial activity and on the other side there is houses and inns. There is a courtyard-esque setting all over, as restaurants often put out seating arrangements covering half the street for their customers to enjoy the ambience of town.

You can get traditional Chinese handicrafts and different stuff sold by locals and foreigners like backpacking items. There are many multinational fast food chains in the vicinity like KFC and McDonalds. However, the locals have managed to retain their own distinct food culture and the Beer Fish is a local delicacy made from fish fresh out of Li River and served alongside a chilled beer. There are cafes serving delectable authentic Chinese dishes alongside the ones selling dishes that are unique to western countries and guests delight in having such variety to choose from.

At night, when the rest of Li River area has long closed down and gone to sleep, the West Street comes alive with its multitude of bars and clubs, providing tourists with a chance to party in the remote mountain village. Local tourists find this a welcome distraction after days of exploring peaceful and scenic vistas. However, some complain about it being a too commercialized and disrupting the atmosphere of an otherwise serene locality. Love it or hate it, West Street is here to stay. 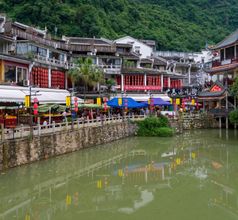 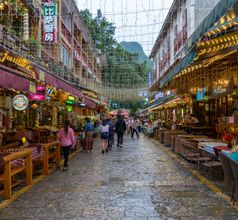 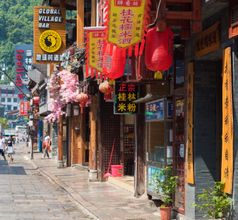 Other Attractions In Yangshuo

One of the most astonishing scenic gems of the Yangshuo County in China is the Assembling Dragon Cave. It gets its na...

Planted during the Sui Dynasty, the Big Banyan Tree is located in Gaotian Village, Yangshuo County, China. This 1,400...

Located in Yangshuo County, China is the famous Black Buddha Cave. Also called the Buddha Water Cave, it has superlat...

Located near the Li River, the Green Lotus Peak (Bilian Peak) is a major mountain peak in Yangshuo County, China. It ...

The Li River has many experiences and sights to offer in its surrounding vicinity but not all are natural wonders. In...

Considered a gem of a landscape, the scenery bestowed on the area surrounding Li River in Guangxi province are absolu...

The Liugong Village is located on the banks of the Li River in the Yangshuo County of China. The village is made up o...

Ripe with a history of 1,400 years, Xi Jie, or the West Street, is the oldest thoroughfare in Yangshuo along with bei...

Xingping is a famous small town along the east bank of the illustrious Li River in Guangxi. It is a little way away f...

Upon the west bank of river Li, about equal distance from Guilin and Yangshuo, Yangdi Village occupies prime real est...

If you have heard of Elephant Hill in Guilin an...

In Guangxi province, there is the amazing Li ri...

Situated near Yangshuo City, China is the Yuzi ...