Located along the Hangzhou Bay on the eastern coastline of Zhejiang Province, China is a beautiful prefecture-level city called Shaoxing. The city has been alternately been called the “place of waterways”, “place of bridges”, “place of calligraphy”, “place of tea”, and the “place of scholars”. Going by some of the relics, it is obvious that Shaoxing is the land of learned and talented people for centuries. Being just south of the mighty Yangtze River has blessed the city with a tranquil scenery that looks like a painting. Its charm lies in its balanced mix of antiquity and modern urbanization.

Shaoxing is recognized as one of the culturally evolved and historically famous cities in China. It has been a popular tourist destination for a long time. The city has many ancient well-preserved Chinese bridges and buildings.

The modern Shaoxing is a shopper’s paradise. The city has several markets lined with souvenir shops where one can pick up all types of handmade knickknacks. The city is also well-known for locally made yellow wine and fine textiles.

An old custom that has sustained over the centuries is the traditional Shaoxing Opera. The Shaoxing Downtown Theatre has regular shows that locals, domestic tourists, and overseas tourists like to experience. The Shaoxing Opera (also called Yue Opera) is very graceful, musical, and has beautiful lyrics.

Due to the numerous scenic areas, historical monuments, and grottoes near Shaoxing, the city has become a well-developed urban area and a sought-after tourist destination. It has countless star hotels, youth hostels, and low-priced hotels to suit different budgets. The star hotels have aesthetic décor, spacious rooms, and many amenities like airport shuttle services, 24x7 coffee shops, in-house restaurants, in-room dining, housekeeping and laundry services, organized sightseeing tours, and more. The budget hotels have convenient locations near fast-food takeaways and public transport systems. 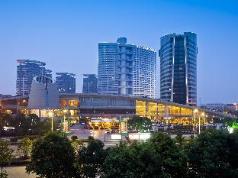 Located in Shangyu, Shangyu International Hotel is a perfect starting point from which to explore Shaoxing. The prope... 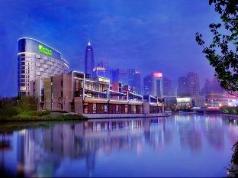 The 5-star Holiday Inn Shaoxing offers comfort and convenience whether you're on business or holiday in Shaoxing. The... 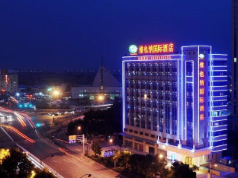 Set in a prime location of Shaoxing, Vienna Hotel Shaoxing Passenger branch puts everything the city has to offer jus... 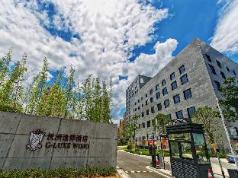 Located in Xinchang, Wojo Hotel is a perfect starting point from which to explore Shaoxing. The hotel offers a wide r... 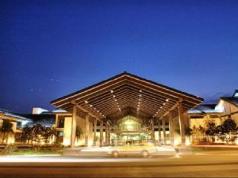 Set in a prime location of Shaoxing, Shaoxing Mirror Lake Hotel puts everything the city has to offer just outside yo...

Being a city surrounded by splendid scenery, Shaoxing has its fair share of scenic areas filled with natural wonders. One such tourist spot is the Wuxie Scenic Area, which consists of 72 mountain peaks, 36 plateau-like flatlands, the Wuxie Waterfalls, and Wuxie Lake. The waterfall consists of four cascades that join together to form the fifth cascade that thunders down like galloping horses!

A well-known historical relic is the Orchid Pavilion, which has aesthetically designed gardens and classical Chinese architecture. This ancient structure is a shrine built in honor of Wang Xizhi, the 4th-century calligrapher. The Lu Xun Memorial is another historical monument built to honor a famous writer. The memorial is now a museum and a popular tourist attraction.

Shen’s Garden is a tourist spot that is popularly visited by couples. This 800-years-old property is a typical Chinese mansion with aesthetically landscaped gardens and was the residence of the Shen family. The site is well-known for the love story of Lu You and Tang Wan.

Another irresistible attraction near Shaoxing City is the crescent-moon shaped East Lake. With its magnificent scenery, hills, grottoes, ancient stone bridges, etc. it compares well with the West Lake Scenic Area of Hangzhou although it is smaller in size.

The Kuaiji Mountain nearby is of great historical significance besides having spectacular surroundings. It is the seat of the first Chinese civilization when Yu the Great established the Xia Dynasty that existed between the 21st and 17th centuries BC.

Mausoleum of Yu the Great