Famous for its picturesque horse-trekking and cycling trails is the charming city of Songpan. It is located in the Aba Tibetan and Qiang Autonomous Prefecture, Sichuan Province, China, about 335Kms from the provincial capital of Chengdu. It is surrounded by beautiful scenery and is also an important connection between other tourist attractions in neighboring regions of Huanglong, Jiuzhaigou, and Hongyuan-Ruoergai Grassland. There are several experienced trekking companies operating in the city to provide guided horse-treks and mountain biking expeditions. Each year, the city sees a huge influx of domestic and overseas tourists during the Lantern Festival when there are cultural displays and other enjoyable activities. 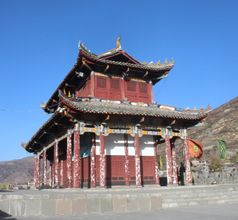 Being on the ancient Silk Route, the city of Songpan was a popular tea-horse trading hub. The city reached its height during the Tang Dynasty reign when it was a major commercial center and its markets were very well-known in ancient times. Even today, the local shops in Songpan are the best places to buy souvenirs with a little bargaining. One can get lovely handmade items like brightly colored textiles, silver jewelry, antique-looking decorative pieces, Tibetan hats, etc.

On the way to the market, one can see different types of places of worship like Tibetan Buddhist temples, mosques, Taoist temples, etc. The city is a good blend of different cultures, ethnicities, nationalities, and religions. The local people are peaceful and polite, although they may not understand the English language. It is advisable to carry a dictionary or download a suitable translation app before visiting Songpan.

Songpan City is smaller than some of the other cities in China and is not usually a part of the tourist circuit despite the fact that it has beautiful tourist attractions. Hence, the choice in upscale 5-star hotels is limited. But there are several mid-range hotels, guesthouses, youth hostels, and lodges spread across the city. The amenities they provide are limited too, except for the 4 and 5-star hotels, which offer the usual gamut of tourist-facilities like customized trekking and biking expeditions, rooms with views, in-house multi-cuisine restaurants, 24x7 housekeeping, and more.

Songpan City is a bonanza of ancient temples and historical monuments. On the southwest of the city is the magnificent Guanyin Pavilion dedicated to the Goddess of Mercy, a female form of the Buddha. Being at the top of a hill, the temple is surrounded by beautiful scenery and provides a vantage point for some perfect pictures. While the Temple of Great Mercy is famous for its bell. Its gong could be heard as far as the provincial capital Chengdu in the old days.

In the northern suburbs of Songpan City lies the charming Chuanzhu Temple. Due to its location, tourists visit the temple on their way to other tourist attractions like Huanglong, Zoige, Jiuzhaigou, Hongyuan, and the prairies.

Among the historical monuments of Songpan, the Ancient City Wall built during the Ming Dynasty is the most famous. The wall was made by boiling together glutinous rice, tung oil, and lime. The wall is 12cms thick, 10 meters tall, and 6,200 meters long.

Another historical site near Songpan is the Ancient Battlefield and Tongyuan Bridge. This site still has the sentry towers, beacons, passes, and the battlefields along the Minjiang and Fujing river valleys in good condition. Of course, it would be a shame to leave Songpan City without visiting the historical Red Army Long March Memorial Park. This park is located on the Yuanbao Mountain and is an important symbol for the Communist Party of China. It is the venue of several important meetings held during the long Red Army march and political struggle.

The way from the Chuanzhu Temple to Gainitai is covered by the most fascinating scenery of vast meadows and prairies where the local are involved in animal husbandry. There are several tiny Tibetan Buddhist temples in the region because the locals are very religious and pious people.