Considered the “roof of the world”, the Tibetan Autonomous Region of China (also called Tibet or Xizang) consists of a vast, high-altitude plateau. It borders the mighty Himalayan range in the south which consists of the highest peak in the world, Mount Everest. The locals live a simple, pious, and non-materialistic life without spoiling the beautiful ecosystem of the region. Albeit slowly, today Tibet has grown into a popular destination for naturalists, Buddhist pilgrims, trekkers, mountaineers, as well as casual tourists.

Located on the Tibet-Nepal border, Mount Everest is a magnificent sight at more than 8,800 meters above sea level. Mount Kailash is another spectacular tourist attraction in the region. It is considered a holy mountain peak by the Hindus, Jains, and Buddhists and is a place of pilgrimage. These snow-capped peaks are beautifully complemented by clear blue skies, and flora.

The region is also the source of many large rivers that flow down into central China, of which the Yangtze, Yellow, Mekong, Salween, and the Yarlung Tsangpo Rivers are the largest and most powerful. As they flow down the slopes, the rivers leave behind a wealth of spectacular gorges, canyons, primeval alpine forests, carpets of flowers, and an abundance of fauna.

Being in the rain-shadow region, Tibet receives very little rain and 46cms of average snowfall in a year. The northern prefectures of Tibet experience extreme climate with scorching summers and freezing winters. The other parts are either cool or cold depending on the season. This is because the entire region has an average elevation of 4,500 meters above sea level.

Majority of the cities in Tibet have developed over the ages because of a strong Buddhist influence. Being the birthplace of several Dalai Lamas, the region has countless monasteries where Buddhist pilgrims come in large numbers. Lhasa, the capital of Tibet is a beautiful city with modern accommodation for tourist. But its strong religious ethos is very evident in the form of many ancient monasteries.

Shigatse is the second largest city in the region. Other important towns include the Nagchu, Sakya, Lhatse, Kangding, Litang, Qinghai, Yushu, Golmud, etc. Most of the cities and towns have comfortable accommodation, souvenir shops, tea shops, cafes, and transport facilities for the benefit of visitors.

The population of Tibet is just 3.18 million which is spread over a vast plateau. Hence, some of the regions are arid uninhabited desert-like expanses. Most of the concentration is in the cities and smaller towns.

Tibet has a relatively mixed culture that is influenced by the neighboring provinces of China. The reverse is also applicable. Tibetan culture has spread to other Provinces as well as to the neighboring countries of Nepal, Bhutan, Pakistan, and India, as these are geographically adjacent to the Tibetan Autonomous Region of China.

The strong Buddhist influence is reflected not only in their daily life but also in their seasonal festivals. The festivals are usually centered on a lamasery (Buddhist temple). So the celebrations include prayer sessions (for the pilgrims) as well as grand temple fairs with games, shops, singing, dancing, contests, etc. The Shoton Festival and the Tibetan New Year are the two festivals when many enjoyable activities are arranged.

There are nearly 20 daily flights coming into the Lhasa Gonggar Airport from Chengdu in the Sichuan Province. Therefore, this is the most convenient way to get in and out of Tibet. There is a network of 5 well-maintained highways and other smaller roads connecting all the major cities and towns in the region. Seven train services ply between Lhasa and the capital cities of the other Provinces of China. Thus, there is at least one convenient mode of transport to reach even the remotest tourist attractions in the region.

The best time to visit the Tibetan Autonomous Region of China as a tourist is either in the spring or autumn seasons. Serious mountaineers usually visit the place in the summer when the expeditions to Mount Everest and pilgrimages to Mount Kailash – Lake Manasarovar are scheduled. The other lakes are also popular tourist attractions in the region.

Lhasa, the capital city of Tibet itself has many world-famous tourist attractions. They include the famous Drepung Monastery, Jokhang Lamasery, Rinpoche Monastery, Potala Palace (Dalai Lama’s residence), and Norbulingka besides others. The last two are UNESCO World Heritage Sites and have the most magnificent architecture. With hundreds of monks in residence, these lamaseries have an unmistakable aura of religious piety and sanctity.

The Rinpoche Monastery has a special significance for mountaineers. Those who wish to climb Mount Everest along the most difficult north face usually offer prayers at this monastery for their safety. So indirectly, Lhasa becomes the base camp for climbing the north face of Mount Everest.

Besides the lamaseries, there are many other tourist attractions in Tibet. The Yarlung Tsangpo Grand Canyon and National Park is a visual treat. It is one of the longest and deepest canyons in the world, with the picturesque Yarlung Tsangpo River rushing through its depths. Cable cars are available for visiting this site.

The cities of Litang, Yushu, and Nagchu have been popular tourist destinations for some years now. The main attraction in these cities are the horse racing festivals held once a year. The enjoyable activities include horse-racing, archery competitions, music, dancing, camping, bonfires, BBQs, and others.

The diet of the Tibetan people is very simple compared to the cuisines of the other provinces of China. Since the people live in arid lands that are at high altitudes, the soil and weather conditions are not conducive to intensive farming. With access to only a limited number of ingredients, naturally, their cuisine is not varied.

Tibetan cuisine consists of butter, yogurt, or cheese made from yak or goat milk. This is the main source of protein and is also the main flavoring agent. Tsamp or barley is the staple cereal from which their local bread balep is made. Some of the other specialties are thukpa (a noodle soup), goat meat, yak meat soup, and dumplings. The city of Ali has other very interesting names. It is also called Senggzangbo (or Sengghe Tsangpo) which literally ... Surrounded by the magnificent Trans-Himalayan background is the city of Chamdo (or Qamdo). It is one of the biggest p... Made up of not less than 18 beautiful counties, Garze Prefecture is located in the Sichuan Province of China. Words a... Kangding, also called Dartsendo is the largest city in the Sichuan Province of China. Its picturesque landscape on th... Lhasa City is also called the “land of the Gods” because it is located in the valleys of the mystic Himalayan Ranges.... 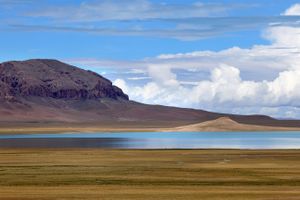 Nagchu (also called Nagqu or Nakchu) is a charming city located at an altitude of 4,507 meters above sea level in the... 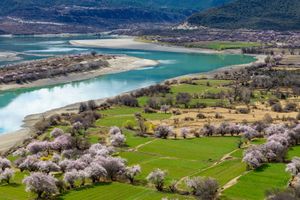 Termed as the Switzerland of China, the prefecture-level city of Nyingtri is located in the eastern part of the Tibet... Shigatse City (also called Xigaze) has a glorious history of more than 600 years with various dynasties ruling at dif...