Built in the Northern Wei Dynasty, some 1,500 years ago, the Longmen Grottoes are a spectacular site which has been described as the epitome of artistic creativity in ancient times. Without modern machinery, the statues were carved in the mountain face and inside, with the finest of detail in carving and color, over a period of almost 500 years. Unsurprisingly, it is a UNESCO World Heritage Site and also among the three most renowned grottoes (the other two are Yungang and Mogao) in China. They are revered among the Buddhists and leave other visitors deeply impressed with the cultural sophistication that they radiate.

From the city of Luoyang, Henan, the Longmen Grottoes built on Mount Longmen (aka West Hill) and Mount Xiangshen (called the East Hill) with the Yi river flowing in between, are at a distance of 12kms. Travelers can take many of the public buses that go to Longmen Shiku, the dedicated station for the site. The entry cost is RMB90 and kids under 3.9 feet go free. It opens at 08:00 and closes at 17:00 (low-season) or 18:00 (high-season). During holidays the times are extended at both ends by half an hour each. The best time to visit is during the cooler months because, being an open site, the sun can get exhausting combined with all the walking (comfortable shoes please!). There will be lesser crowds in off-season as well. Have a guide with you to explain the place or mobile data so you can hear the descriptions and stories of these relics in English.

The caves house statues from the really tiny (2 inches) to the amazingly enormous (56 feet). There are different areas within the cave; all have a different display and are worthy of a visit. But before all that, there are 99 steps that need to be traversed to reach the main area. 30% of the caves were built by the Northern Wei and 60% are thanks to the Tang Dynasty, with a marked difference in architectural style of the statues, which is fun to spot.

There are more places of interest on the West Hill than the East side. The first cave to be built was the Guyang Cave in 494 AD. It has some 800 fine scripts engraved along with 1,000 niches and has figures that are slim and sleek, classical of Northern Wei Dynasty.

Another cave that depicts their style is Binyang Cave, which has further 3 caves among which the one in the middle is the most toured.

The Fengxian Temple (containing the biggest Buddha), the Wanfo Cave (with an army of tiny statues) and the Qianxi Temple have the characteristic of the Tang Dynasty with round and realistic figures.

After you have taken in the delights of the West Hill up close, another great view is from the East Hill across the Yi River. Besides great photo ops from the East Hill, there are also the Xiangshan Temple and Baijuiy’s Tomb (the Chinese poet Baijuyi is buried here). 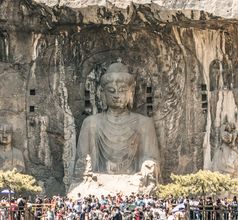 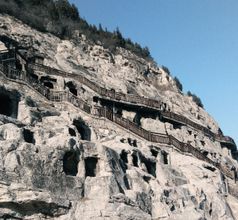 Other Attractions In Luoyang The Baima Temple (White Horse), in Luoyang, China is a spectacular temple complex spread over 13 hectares. It has bea...

Respected and admired equally by Confucians, Taoists, and Buddhists, General Guan Yu is a heroic figure who lived dur...

Built in the Northern Wei Dynasty, some 1,500 years ago, the Longmen Grottoes are a spectacular site which has been d...

Extending over an area of 40 hectares, the Wangcheng Park, Luoyang, China is a spectacular cultural zone and a well-k...