Like a scattering of white rice in the shadow of Mountain Gephel in Lhasa, Drepung Monastery is a centuries old construction that is regarded as the largest Gelugpa (a center for the teachings of Tibet origin Buddhism). Besides Ganden and Sera Monastery, Drepung is counted as one of the most important monasteries and certainly as one of the grandest. Though pupilage is much less due to Government restrictions, it is still an impressive site to see and rekindle your spirituality.

The monastery is located on the outskirts of Lhasa and can be accessed through public buses going to the base of the mountain, after which there is a bit of a tough walk to the main entrance. Taxis are another reasonably priced and much more convenient option, costing under RMB50. It is recommended that you set aside at least 3 hours and go in the morning as some areas close later in the day. And make sure to wear appropriate clothing (out of respect and for sun protection) and comfortable shoes as lots of walking across inclining paths is in store when visiting Drepung. The entrance fee is around RMB60 while the ideal time to go is from March till October.

Drepung Monastery is highly revered for good number of reasons. Not only was it built on a grand scale that is unmatched to date, but when in full swing, it housed a mighty 8,000 monks and was the mother monastery to several Dalai Lamas till the construction of the Potala Palace. It also holds many antiquities and several statues throughout the complex. Places of interest, which you must see in a clockwise order, start with the Ganden Potrang which used to be the prime office of the Dalai Lama. There are three floors, each serving different purposes, with the topmost floor being his living quarters.
Next up, the Coqen Hall is located in the middle of the complex and has a huge open courtyard in front. Beyond this, visitors can get panoramic views of Lhasa city. This central building is much better maintained and adorned then many other parts of the monastery. There are long hangings on the walls, known as Thangkas, and 181 columns that prop up the roof of this assembly hall. Within, many of the statues, chinaware, ancient items of value and art pieces are displayed, most popular of which is the Qamba Buddha statue, an enormous bronze statue of a child-age buddha.
Besides Ganden Potrang and Coqen Hall, there are four schools (or Zhacangs), each teaching a separate discipline to monks of different origins. The most populous one is Loseling College followed by Gomang, Deyang and Ngagpa college. Witnessing the monks practicing debate is quite an experience!

Visiting during the Shoton (Yogurt) Festival, which is held on the 30th June of the Tibetan calendar, will give you an exclusive view of a large tapestry hung on the side of the hill specially for the occasion. This is then followed by cultural activities and opera performances. 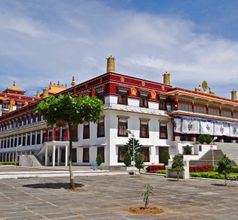 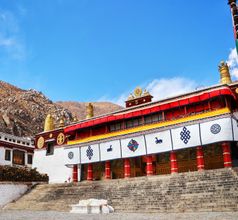 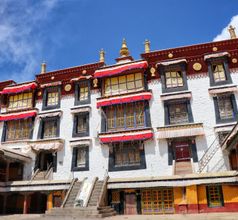 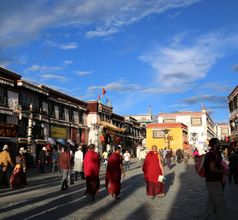 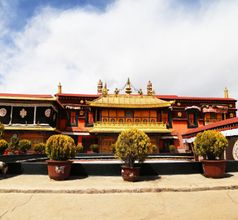