Well-known as the “ice city of the world”, Harbin City is an extremely popular tourist destination for winter sports enthusiasts. It is the capital of the Heilongjiang Province which lies in the northeastern corner of China. Its ski resorts and nature reserves have made it a perennial winter-tourism zone because the ice never melts here. It is little wonder that Harbin City saw nearly 139 million inbound tourists in the year 2017! 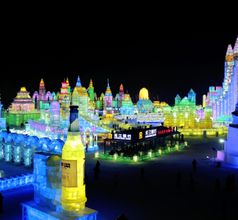 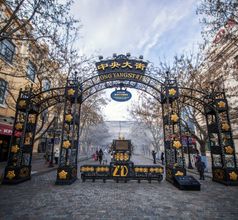 Seeing the architecture one is amazed by the strong Russian influence in Harbin City. In the 19th century, when Russian engineers constructed the Trans-Siberian Railroad, they left behind a classic Russian culture in the form of the splendid Saint Sophia Cathedral. This Eastern Orthodox Church is also a museum with relics showcasing the history of the time. Central Street is another beautiful avenue with its Russian-style buildings.

The Jewish New Synagogue is another example of external influences in Harbin. The synagogue also has a museum that contains artifacts depicting the history of the Jews in Harbin. The old synagogue has been converted into a café and youth hostel.

The Harbin Dragon Tower is a 336 meters tall ultra-modern skyscraper. Similarly, there are many other tall iconic buildings that illuminate the skyline of the city with their state-of-the-art architecture and modern eco-friendly designs. They include the Harbin World Trade Center, Agricultural Science and Technology Building, Harbin Bank headquarters, etc. These buildings are located in a busy commercial zone along with shopping malls, recreational facilities, entertainment zones, and more.

The rated hotels in Harbin are located in the busy urban areas of Youyi Road, Zhongshan Road, Ganshui Road, Shangyou Street, Chuangxin Yi Road, Zhongxing Avenue, and Songbei Avenue. They follow the tradition of hospitality and service that is ingrained in the local people since ages. Some of the amenities include central heating, concierge services, 24x7 in-room dining, housekeeping, taxi services, airport shuttles, babysitting services, and more. There are also various mid-range hotels and low-priced hotels/lodges available for those traveling on a limited budget.

There are various theme hotels as well in Harbin. There are ski resorts in the mountains, shopping-special hotels located near the pedestrian streets, business hotels offering special services like conference rooms, and events hotels with large banquet halls. 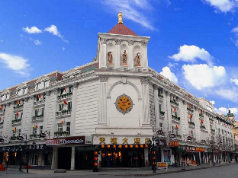 Harbin Tianzhi Hotel is a popular choice amongst travelers in Harbin, whether exploring or just passing through. Both... 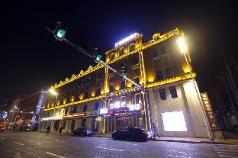 Set in a prime location of Harbin, Harbin Petrochemical Engineering Hotel puts everything the city has to offer just ... 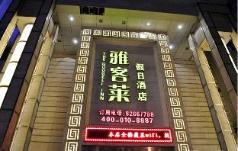 Stop at Yakelai Holiday Hotel Harbin to discover the wonders of Harbin. Featuring a complete list of amenities, guest... 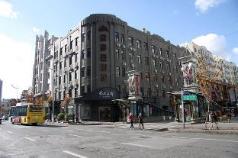 Harbin Russian Huropa Hotel is conveniently located in the popular Daoli area. The hotel has everything you need for ... 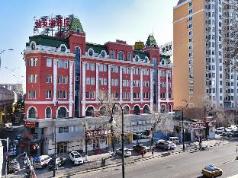 Bremen Hotel Harbin Train station is conveniently located in the popular Daoli area. Featuring a satisfying list of a...

The landmark event that sets Harbin apart from the other cities in China is the Ice and Snow Festival. It is held here each year in the month of January in the winter season. The best and largest ice sculptures can be seen at the Ice and Snow World, Zhaolin Park, Yabuli International Ski Resort, Sun Island Scenic Area, and the Ice Lantern Garden Party venues. Winter sports activities like skiing and snowboarding are also popular pursuits at these places.

Families and big groups of tourists also indulge in other enjoyable activities in Harbin like the gondola ride on the Songhua River, skiing on the slopes of the Deer Flat ski resort, and rafting on the artificial river in the Mao'er Mountain valley.

Also called the Harbin Art Gallery, the St. Sophia Cathedral in Harbin, China is the biggest Orthodox Church in the E...

Spread over a vast expanse of 5.7 hectares, the Jile Temple is situated in Harbin, China. It has various sections lik...

About 180Kms southeast of Harbin, China is the most beautiful Yabuli Ski Resort. It is the foremost training spot for...

The Central Street is one of the most unusual places in Harbin, Heilongjiang province, China. Since this cobblestoned...

Stalin Park is situated on the banks of the Songhua River, China, just opposite the Sun Island. The buildings in the ...

The Japanese Germ Warfare Experimental Base (also called Unit 731) has a most horrifying history. It is the place whe...

For those who love nature and animals, the Siberian Tiger Park in Harbin, China is a must-see place. The Park boasts ...

The Sun Island Park is the most popular tourist attraction in Harbin, China. It is such a vast area, that part of it ...

With a vast area of 3000 hectares, the Yuquan Hunting Ground or Yuquan Shouliechang is located about 62Kms from Harbi...

The Zhaolin Park, Harbin, China is a popular scenic area and has recreational facilities for tourists. It is surround...

The city of Harbin in China had been original established by Russians. Over centuries, the city has seen power-strugg...

The Jingpo Lake (Jingbo Lake) is located in the Heilongjiang Province of China. It is a very scenic area full of nat...

Harbin Taiping International Airport is a double terminal, laid back airport in the capital of Heilongjiang province. It has stop overs from all local major carriers and some international airlines which provide well-worn links within China, Russia and Southeast Asia along with links to top airports in the west. The shuttle bus takes RMB20 to get to anywhere in the city while a taxi would cost RMB120 plus for a trip downtown (40 kms apart).