Located on the ancient Silk Route in the Xinjiang Province, China is a beautiful oasis city called Hotan. It has been alternatively called Hetian or Khotan over the ages. It has been the entry point into China from Tibet and India and across the Taklamakan Desert. Multiple nationalities and ethnicities have arrived and made their home here. Today’s Hotan City is a colorful blend of 19 nationalities consisting of the Uyghur, Hui, Han Chinese, Kazak, and others; among which the Uyghur people have a dominant presence. The city is known for its tourist-friendly environment and spectacular desert safaris.

Being an oasis city in the Taklamakan Desert gives Hotan a Middle Eastern aura although it is in China. In ancient times traders from India, Tibet, and other countries came up the Silk Route and travelled across the Desert for business and trade.

White jade from the Tarim River basin was the most precious commodity that was traded in the past. In fact, the fine quality of the jade has been mentioned in ancient literature dating back to 200 BC. Today, after centuries of scouring the riverbeds, the quality of the jade is not the same anymore. But the locals are very talented and make beautiful souvenirs with the available stones that are worth buying for their exquisite art.

Although the suburban parts of Hotan City still have their ethnic and old-world charm, downtown Hotan is a well-developed urban area. The ultra-modern locality of Houjie has the best star hotels in Hotan. One can choose from 3, 4, and 5-star hotels, service-apartments, inns, youth hostels, and more. Accommodation is available to suit different budgets, age-groups, and the number of people traveling to the city. Except for the budget accommodation, most of the hotels provide grade-one amenities, which include in-house restaurants serving International fare and organized sightseeing tours. 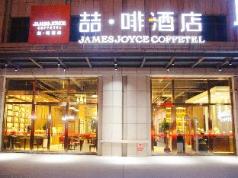 Located in Qira, James Joyce Coffetel·Hotan Chuanyi Kaixuan is a perfect starting point from which to explore Hotan. ...

Today, desert safaris on camelback are a popular tourist activity in the city. The travel agents provide tents, sleeping bags, woolen blankets, camping equipment, and other essentials. An experienced guide will accompany every group. On the safari, the first checkpoint before entering the proper desert region is the Desert Vista Platform. It is called so because it provides a picturesque vista of the massive sand dunes that seem to go on endlessly. This is definitely a great vantage point for photography.

The safari itinerary usually includes all the most popular tourist attractions around the city, like the archaeological site of the Melikawat Ruins. The ruins were once the capital of the ancient Kingdom of Khotan. The place is now a museum with artifacts like pottery and glass items still on display. The Rawaq Stupa is the best-preserved part of the Melikawat Ruins. The site has pottery kilns, bowls, jars, and other noteworthy ancient relics. The most significant find from the ruins is the clay statue of the Buddha with its gold-leaf decoration.

Other must-see attractions around Hotan City are the Khotan Public Square where the Uyghur people perform dances for the tourists, the Khotan Carpet Factory, where visitors can see how carpets are made and buy one, the White Jade River basin, Jade Factory, Silk Workshop, Imam Asim’s Tomb, Khotan Museum, and the Khotan Winery. The Khotan Museum, in particular, has numerous ancient relics like pottery, sculptures, paintings, textiles, etc. that show the Buddhist culture of the region.

A visit to the Khotan Market square will be a very interesting experience. The place is lined with small shops similar to the souks in the Middle East. One can purchase several locally made items like handmade carpets, jade souvenirs, jade jewelry, silk fabric and accessories, herbal medicines, and more.

Hotan city in Xinjiang, China is a Uyghur dominated area. Its airport is located 12 kms away and a taxi takes 20 minutes to arrive from city center. Public bus takes over 1.5 hours. The most popular route is Urumqi with about 99 flights in a single week, followed by Korla with 16 weekly flights. Other destinations include Aksu, Kashgar, Kuqa, Chengdu and Hangzhou. Airlines coming here are Tianjin, China Southern, Shanghai and Shandong Airlines.