Turpan is a prefecture-level city situated in the Xinjiang Uyghur Autonomous Region of China. It is a charming blend of Western and Eastern cultures and religious practices. The reason for this unusual mix is that it lies on the ancient Silk Route along which countless Western traders came to China in ancient times. They brought goods to sell and buy Chinese products. Over the centuries the left behind a rich legacy of their customs and traditions that are practiced even today. The Uyghur ethnic group follow Islam just like the Persian traders who came from the West.

Aboriginals of Turpan City were called the Gushi people because the city was known as Gushi in the ancient times. Subsequently, during the Han Dynasty in China, Turpan was the capital of the Cheshiqian Kingdom. There are many 5th century relics in Turpan Museum that showcase their history.

With the influx of Westerners across the Silk Road and migration from other parts of China, Turpan City has evolved into a pleasant mix of nationalities and ethnicities. There are many ancient relics around Turpan that showcase the history like religious grottoes, 200 ancient city ruins, beacon sites, rock paintings, and numerous tombs. Many of the artifacts excavated near the city are also displayed at the Xinjiang Museum.

Being a popular tourist city, downtown Turpan has various 3, 4, and 5-star hotels and holiday resorts. They offer top-class accommodation and depending on the stars they offer amenities like airport shuttle service, 24x7 in-room dining, housekeeping, laundry services, organized sightseeing tours, International cuisine, etc. For families traveling on a limited budget, backpackers, or solo travelers there are numerous low-priced inns and lodges with clean rooms but limited amenities.

Stop at Turpan Whitecamel Youthhostel to discover the wonders of Turpan. The hotel offers guests a range of services ... 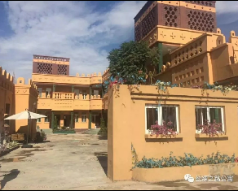 The 4-star Silk Road Lodges offers comfort and convenience whether you're on business or holiday in Turpan. The prope... 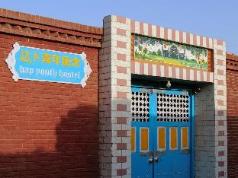 Turpan Dap Youth Hostel is conveniently located in the popular Turpan area. The property features a wide range of fac... 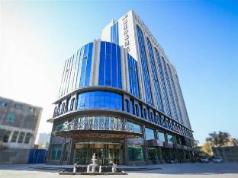 Jinjiang Metropolo Hotel - Turpan Administration C is a popular choice amongst travelers in Turpan, whether exploring... 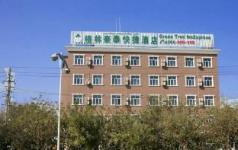 The Grape Valley (also called the Turpan Grape Gully or Green Pearl Gully) is a very picturesque site located just 10Kms from downtown Turpan. This region has been providing grapes to the whole of China for the last 1,000 years. Today, the vineyards are spread over 200 hectares of land and a tour of the vineyards is a popular tourist activity.

The numerous ancient city ruins in the Gobi Desert that are worth a visit are the Ancient City of Gaochang, Astana-Karakhoja Ancient Tombs, Idikut Ancient City, and Ancient City of Jiaohe (also called Yarghul Ancient City). The spectacular Bezeklik Thousand Buddha Caves located at the foothills of the Flaming Mountain have the best examples of ancient Buddhist art. The murals are spread over 1,200 square meters of wall space in multiple caves. Built in the 18th century in honor of Emin Khoja, Turpan’s heroic figure, the Emin Minaret is the tallest minaret in China.

For those who are interested in seeing different types of flora, the Desert Botanical Garden, and the Aydingkol Lake are must-sees. Finally, a visit to the Sand Therapy Health Center after all the sightseeing will be very relaxing and make the visit to Turpan a memorable one.

Within Xinjiang, Turpan Jiaohe Airport provides an aviation hub for residents of Turpan. Defunct since the 1970’s, it was relocated and rebooted in July 2010. It now stands 16 kms from town center and takes 35 minutes to come to. The Lanzhou–Urumqi High-Speed Railway station is 5 minutes from the airport. Flights from Turpan are to Korla, Lanzhou, Karamay, Hami city, Zhengzhou, Xining, Xi’an and Kashgar mainly via China Express and China Southern Airlines.