There is no doubt that Wuhan City is not as famous as Beijing or Shanghai where tourist destinations in China are considered. But if one looks beyond the usual pre-planned tourist circuits, one can find some real gems in the vast picturesque landscape of China. The city of Wuhan is the capital of the Hubei Province in central China. It is divided into two sections by the Yangtze and Han Rivers that pass through it. These water bodies have blessed the city with lakes and natural green parks making the air pollution-free and the scenery irresistibly beautiful. Hence, Wuhan has always been a coveted tourist spot for domestic and overseas visitors since ancient times.

Another reason why Wuhan is a popular destination in China is that, despite its lush green expanses, it is a highly developed urban area with a well-organized infrastructure and tourism and hospitality sectors. The local population is educated, cultured, and has a helpful attitude towards visitors to their great city. 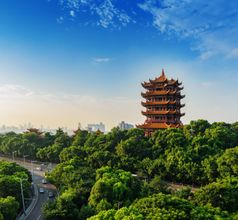 Wuhan is a city that has ancient relics as well as ultra-modern skyscrapers. The city was occupied by the State of Chu between 770 and 221 BC. The city’s history can be traced back to more than 3,500 years going by the artifacts excavated in ancient tombs located around the city. The Hankou district of Wuhan was and still is a major commercial and business district due to the waterways. The city witnessed the historical event of the Wuchang Uprising in 1911 that was spearheaded by Dr. Sun Yat-sen which led to the nationwide Xinhai Revolution. This resulted in the downfall of the Qing Dynasty’s imperial rule and the establishment of the People’s Republic of China.

Today, Wuhan is a large metropolis where modern concepts like Information Technology and industrialization coexist with ancient relics and picturesque natural scenery which has an un-spoilt look. Shopping for souvenirs is an enjoyable experience in the Tanhualin locality where there are numerous shops and roadside cafes.

Being a metropolitan city and a provincial capital, Wuhan has always been a popular destination for domestic tourists. It has also grown in popularity with overseas visitors as well in the last few years. The city can provide various choices in accommodation, from the most expensive luxury hotels and resorts to the cheapest but clean and basic accommodation. The upscale 3, 4, and 5-star hotels are tastefully decorated and have spacious rooms. They also provide several amenities like airport shuttle service, in-house restaurants serving International-style gourmet meals, concierge service, 24x7 room service, housekeeping, swimming pools, customized sightseeing tours, etc. The cheaper accommodation is in the form of low-priced hotels, service-apartments, youth hostels, inns, guesthouses, etc. where the premises are usually clean but the amenities are just basic. 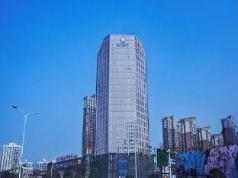 Set in a prime location of Wuhan, Wuhan Guanggu Joya Hotel puts everything the city has to offer just outside your do...

The 2-star 7 Days Inn Wuhan Wu Da Jie Dao Kou offers comfort and convenience whether you're on business or holiday in... 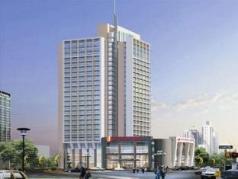 Stop at Wuhan Tieqiao Jianguo Hotel to discover the wonders of Wuhan. Offering a variety of facilities and services, ... 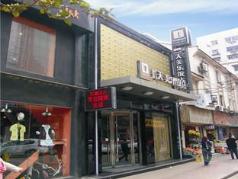 Located in Wuhan City Center, Tomolo Hotel Jianghan Road Branch is a perfect starting point from which to explore Wuh... 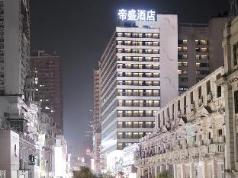 Dorsett Wuhan Hotel is conveniently located in the popular Wuhan City Center area. The hotel offers guests a range of...

The East Lake Scenic Area is the highlight of Wuhan City although there are numerous other tourist attractions in and around the city. This area consists of several tourist attractions and parks where swimming is permitted. The Liyuan Park on the northwest of the Lake is the most popular swimming area. This site has other facilities so that visitors can spend a relaxing day and enjoy all the attractions.

The Snake Hill Park is another picturesque green spot in Wuhan City. Besides plenty of green landscapes, the park also consists of the Yellow Crane Tower and the Mao Pavilion. The Crane Tower has a gigantic bronze bell which is the highlight of this attraction. One can spend an entire day exploring the park because there are plenty of teahouses and other facilities for the comfort of tourists. At one of the teahouses, there is a free live performance of Chu-kingdom style music.

Other green areas in the city are the Wuhan Botanical Garden with a vast collection of tropical plants and Moshan Hill with its ancient temples, monuments, and souvenir shops. The hill is also a popular spot for hiking.

Wuhan has its fair share of ancient monuments, of which the Mao Zedong's Summer Villa is the most famous. It is one of the villas where Chairman Mao stayed for a few months. With typical décor of the 1950s, the villas is a period-piece and a popular tourist attraction.

There are several temples in Wuhan City that are definitely must-sees not only because of their classic architecture but also for the ancient relics that they have. The most popular temple in the city is the Guiyuan Temple. It has a unique design because it is a typical pagoda-style Buddhist temple surrounded by classical Zen-style gardens. The temple consists of 500 statues of Arhats (Buddhist sages) that are an awesome sight.

Built during the Ming Dynasty, the Qingchuan Pavilion is located in Wuhan, China with the famous Yellow Crane Tower f...

Located on the banks of the Moon Lake, Wuhan, China is the splendid Guqin Tai or Heptachord Terrace. It was built to ...

The VOX Bar & Livehouse follows the principle of “voice of freedom and voice of youth” and truly believes in the free...

The history of this temple started during the Southern Dynasties (420 – 499). It was established as Dongshan Temple a...

The East Lake was built within the borders of Wuhan in 1950 it was pronounced a tourist attraction in 1982. Upon esta...

Yellow Crane Tower is situated on Snake Hill in Wuhan and it is one of the most famous towers on the south side of th...

If you head southeast from Wuhan City center for about 12 miles, you will reach the Longquan Shan Scenic Area. This i...

Covering an expanse of 46,900 square meters, the Buddhist Guiyuan Temple is located in Wuhan, China. It was built dur...

With water bodies on all sides, the Gui Shan (Tortoise Mountain) is so-called because it looks like a tortoise standi...

The Wuhan Yangtze Great Bridge (Great Bridge) is a very unique structure in Wuhan, China. It is a 1.6Kms long bridge ...

Having a massive collection of 200,000 ancient relics, the Hubei Provincial Museum in Wuhan, China is considered a gr...

The well-known Mao Zedong Villa is located near the East Lake Scenic Area in Wuhan, China. It was a pleasant retreat ...

Located in Wuhan, China the Ximen Night Market is the liveliest and the best street for shopping and eating. The yout...

The beautiful Changchun Taoist Temple is located near Wuhan City, China. It dates back to the Yuan Dynasty and then w...

Wuhan rail transit (Wuhan Metro) is a city rail transit service for Wuhan, Hubei, China. Its first line, Wuhan Rail Transit Line 1, opened and operated in July 28, 2004, making Wuhan the first city in Central China to open rail transit. As of December 2017, there were 7 lines of rail transit in Wuhan, including line 1, line 2, line 3, No. 4, line 6, line 8, and Yangluo line, with a total of 167 stations with a total length of 237 kilometers, and seventh lines in mainland China. As of December 2017, there were 16 lines of rail transit in Wuhan, including the south line of line 2, Caidian line, line 5, No. 7 line one, paper workshop line, 8 line two, three of line 8, east section of 11 line, 11 line two, 12 line and front Sichuan line, which were kilometre in construction mileage. By 2020, Wuhan rail transit will form 11 lines, a total of 401 kilometers of rail transit network, basically form the "network of the main city, the new town line" of the rail traffic network system. As of April 2018, the average daily passenger volume of Wuhan rail transit was 2 million 700 thousand times, the maximum daily passenger volume reached 3 million 514 thousand and 200 times, which was sixth in the country. The passenger flow intensity was 1.5-1.8 ten thousand people per kilometer, accounting for 38% of the bus passenger traffic volume in the city. In 2015, Wuhan rail transit co operated 570 million passengers and 1 million 556 thousand passengers per day, carrying 23.5% of the city's public transport capacity.

Wuhan Railway Station is located to the far east of the city, and serves mainly high-speed trains to China's 1st Tier cities. It can be accessed via Metro Line 4.

Located in Hankou district, this station is much more central than Wuhan Railway Station. It serves both low-speed and high-speed trains and can be accessed via Metro Line 2.

A smaller station located on the eastern side of the Yangtze, Wuchang Railway Station serves mainly low-speed trains and be accessed by Metro Line 4.

Wuhan Tianhe International Airport is a modern, fully-equipped hub. Connections are available for Paris, Rome, Moscow, Dubai and cities in Asia along with many domestic destinations through major carriers. Downtown is 30kms away, with taxi taking 35 minutes to reach and bus taking 1 hour. Railway station under the Airport Transportation Center gets there in 15 minutes (RMB8). Airport shuttles are available for routes all over town and Metro Line 2 also connects to downtown.

Winters in the city are cold the average January temperature is 4°C (39°F) and low temperatures around freezing and the high humidity makes it feel much colder. Summers are hot and very humid. The combination of hot daytime temperatures, 32°C (90°F) on average. Spring and autumn are pleasant transitional seasons.