Time required to see this fascinating place would be half a day or at least 3 hours minimum to get the full disclosure of each and everything. Visiting hours are between 08:00 in the morning to 23:00 at night, which gives you plenty of time to explore. Best time is to pay a visit is in the morning as it might get a little creepy at night experiencing the dead (or not). But also because it gets crowded like cattle in the evening so go early or do not be surprised by the mob. Furthermore, there are no accessible wheel chairs but lifts and corridors are present inside. Travelers must have a physical fitness of moderate level as there is a lot of walking exercise involved. All of the information is provided in Chinese language so make sure to arrange some help with that.

This site is located in Lintong District, about 25 miles to the northeast of downtown Xian. To get there, you can take tourist bus No. 5 (306) departing from the east square of Xi'an railway station that will take 1 hour but will be cheaper; for like RMB 7 per person. Buses coming to this destination are plenty. You can also go by the taxi, which will cost a bit higher but will get you there faster by at least half the time than the bus. The entrance ticket to the museum is RMB180 per person.

The sheer scale of the site is incredible. You will not believe your eyes while you look down at the millions of ranks of full-sized terracotta soldiers. They were originally painted but the color faded away over time. To make each of them appear different, they were given different facial features. The layout is such that you can just walk all the way around to look from every angle. Many of the statues you will see are holding real weapons from the past which has increased their realism, such as long shafted weapons, sharp spears, pointed arrows and daggers though most of these rotted away. It is believed that these brave soldiers/guards were meant to protect or accompany the tomb of the first emperor of China in the afterlife. It is also said that some of the statue’s body parts were made first, separately, like the head, arms and legs, and then put together with the rest of the body in the end. You can also see how their replicas are constructed now at the factory near the museum after your trip. These soldiers are a mystery. Their parts have been buried underground for nearly 2000 years until the 20th century, after being discovered by farmers.

This cannot be put into words exactly because they just would not do justice to it. Do not leave China without visiting Xian and its respect worthy Terracotta Warriors. And for people who admire the depth of history and want to regard the ingenuity of the Chinese, this is the right place to be. 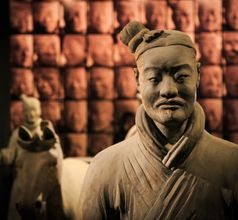 Other Attractions In Xi'an

Situated on the original excavation site, the Banpo Museum is near Xi’an, China. The museum is spread over an area of... Also known as Dayan Pagoda, this ancient building is located about two miles from the center of Xi’an. The building h...

This royal tomb belongs to the first emperor of China Qin Shihuang. It is located about 20 miles from the Xi’an downt... About 120Kms from Xi’an, China is the Famen Si (Famen Temple) which is part of the Famen Temple Scenic Spot. It is a ...

Covering a historical period of more than 170 years, the stone steles at the Forest of Steles Museum (Beilin Museum) ...

Declared a UNESCO World Heritage site, the Great Mosque of Xi'an, China is a very popular tourist attraction and a pl...

Commonly called the Hanyang Mausoleum, the Hanyang Tomb and Museum lies just 20Kms from Xi’an, China. This is an unde... Located in Xi’an, China the Huaqing Pool has been a tourist attraction since the Tang Dynasty. Also called the Huaqin...

With over 10,000 priceless artifacts the Lintong Museum in Xi’an, China is an often-visited tourist attraction. It ha... Li Shan (Mount Li) is a scenic area located near Xi’an, China. It is difficult to say whether the mountain peak is pa...

Xi’an City has its own Muslim Quarter located i...

The Shaanxi History Museum located in Xi’an is ...

These two towers are located at the same square...