Linggu Temple is located in Nanjing’s suburb, within the Zhongshan (Purple) Mountain National Park. It is the self-proclaimed best Buddhist Temple across the world. The foundation was laid some 1,500 years ago, during the Southern Dynasties period but it was totally annihilated in the Taiping rebellion. Reconstruction and expansion were carried out during the Qing dynasty and the final addition of the Linggu Pagoda was made in 1932. The whole complex is now a tribute to fallen Chinese soldiers.

The temple is on the route of subway line2 and many public buses. Just get off at the station for Zhongshan National Park, wherein are many other famous sites as well, including Sun Yat-sen’s Mausoleum and Xiaoling Mausoleum of Ming Dynasty. Transport between the sites is facilitated with a special tourist line (RMB2) and battery cars (RMB10). Admission cost is RMB35, though you can get a RMB100 combo ticket which gives you entry to all paid sites on venue. Children under 4.6 feet are allowed free access. Timing are 06:30 to 18:00 during high season and 07:00 to 17:30 during low season. It is best visited in milder season, especially mid-September to mid-October when the Osmanthus Festival is held to celebrate the blooming season of the elegant white flowers.

Built big enough to accommodate 1000 monks, the Temple has multiple buildings of interest to visitors. The one with the most historic value is the Wuliang (Non-Beam) Hall, so called because it was made entirely out of masonry and not wooden beams or supports as was the tradition in those times. There are three archways on entry and exit of this hall and inside are fascinating waxworks that narrate the important events in the history of modern China. It is all in Chinese though, so you may need a translating app.

Next in line is the Xuangzang Memorial Hall, in memory of a renowned monk who rendered great services to the Temple, with some of his work enshrined in the Hall as well.
Within the Linggu Temple is the eponymous Pagoda, which was constructed in 1932 by an American architect, is 9 story high and the top is accessible via a staircase. There is not much to see inside the pagoda, which was also meant to honor soldiers who lost their lives in battle, but the structure is beautiful and the birds-eye view at the top, of the mountains and the forest, is worth the effort of climbing all those steps.

The temple is lush with greenery and is an absolute delight when flower season is in full swing. There is abundant shade and wafting fragrances provided, courtesy of incense and mother nature. But there sure is a lot of walking involved, especially if you have the other two Mausoleums in the National Park on your itinerary. Luckily, there is a restaurant in the Temple’s premises that offers a singular dish which, locals claim, is the best tasting veggie noodle dish ever! The secret? Specially selected vegetables and the chef’s magic touch! 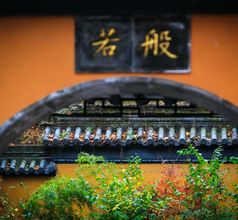 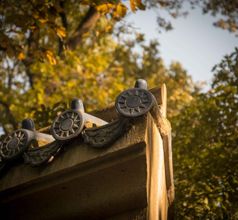 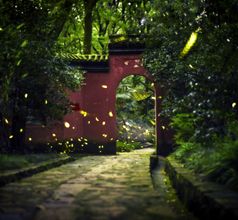